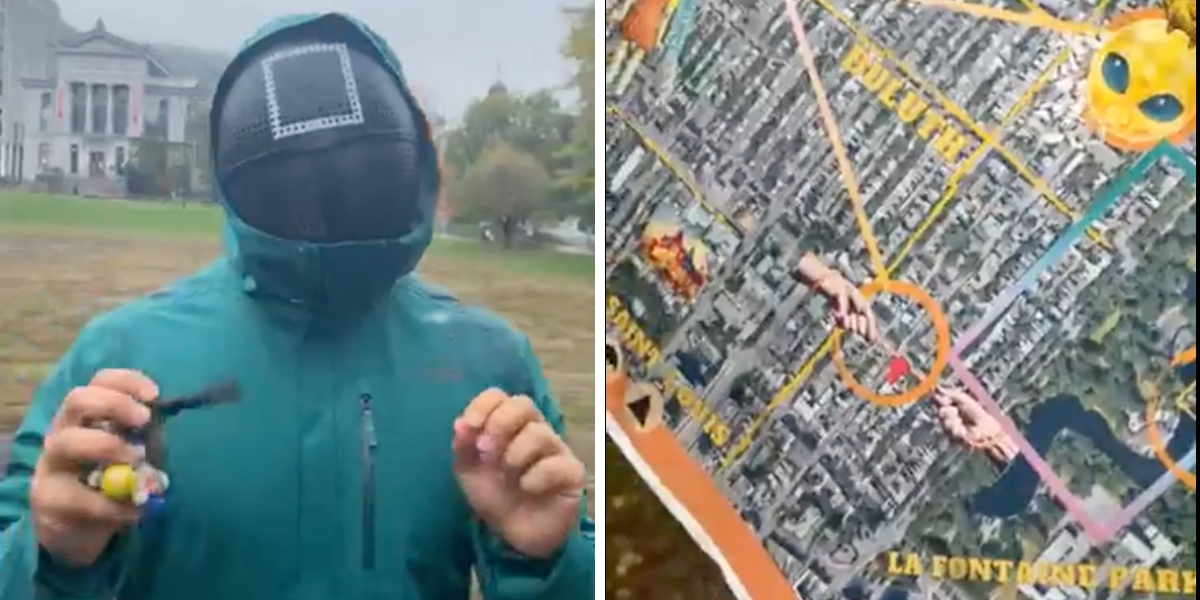 Thinking of taking part in Montreal’s IRL “Squid Adventure Games,” based on the hit Netflix show?

Montreal’s IRL ‘Squid Game’ Creator Shared A Preview Of The Activity Map & It Looks Legit But you don’t have to fear for your life.

But you don’t have to fear for your life.

The activity’s creator shared a preview of the game map with MTL Blog and it looks so legit that you may have you remind yourself your life’s not in danger in this “non-murderous” take on Squid Game — although, the fact that he was wearing a square-marked mask and holding a bag of marbles at the time might have also had something to do with it.

The Montreal activity is being organized by Walking Brain, a geo-gaming company that runs outdoor adventure games around the city.

Walking Brain founder David Naderi told MTL Blog that during the Squid Adventure Games, players will walk between parc Mont-Royal and parc La Fontaine guided by their smartphones. Games will be played on a web-based mobile app that uses artificial intelligence, meaning players don’t actually need to touch anything or enter any buildings.

“They will solve some location-based riddles, some mind puzzles, that are very similar to those of Squid Game,” Naderi said.

MTL BLog’s Alex Melki met up with Naderi at McGill University to get a better idea of how the games will work, which is how he ended up getting a sneak-peek of the map on camera.

Squid Game fans will notice that the map is full of imagery depicting different aspects of the show, including the “red light green light” game, the VIPs, tug-of-war, and dalgona candy.

Asked his advice to potential players, Naderi said, “[They should] find someone to be teamed [up with] that’s as passionate as themselves to play this game and just enjoy because we’re going to separate them from the world of reality.”

Teams will consist of three to four players with six rounds of different games each team must complete. If the team can’t complete one of the rounds, the system will eliminate them. The activity lasts three to four hours and you need to be 18 or older to play.

Winning teams get a cash prize of up to $200, depending on how many players sign up.